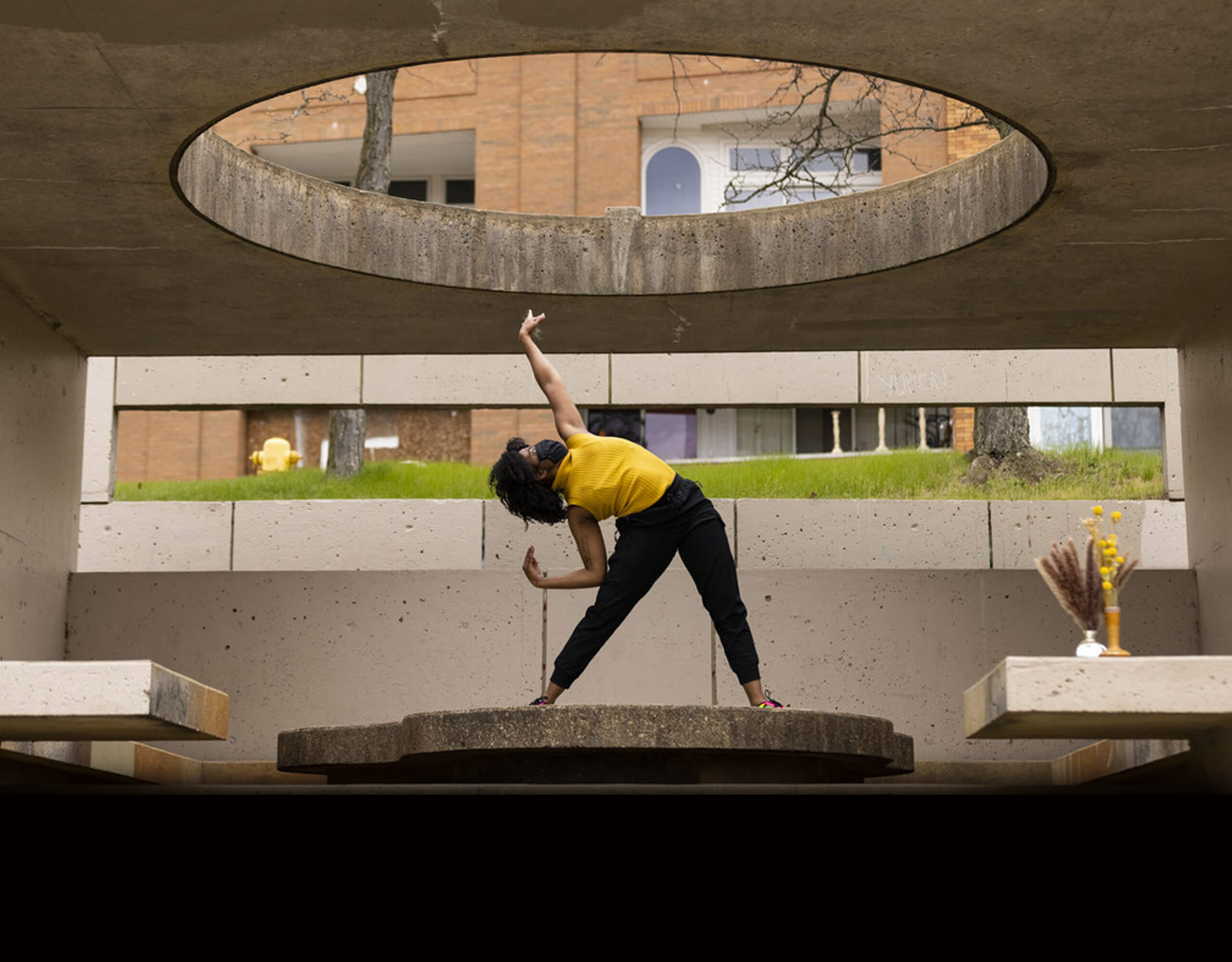 Welcome to the Arts & Culture Research Cluster (A+C) at the University of Michigan-Flint. The cluster was created out of a desire to bring researchers, students, regional cultural institutions, and community organizations together in collaborative partnership. We aim to bridge existing gaps in coordination and cultivate new and diverse audiences for the arts. Such a partnership can advance the intellectual and cultural vibrancy of Flint, Michigan, and make an impact on the national cultural landscape. The group will seek collaborative program funding and opportunities, share information and promote artistic and cultural collaborations, elevating the arts and culture of the city of Flint.

As a research collaborative, the Arts & Culture Research Cluster team will focus on three main areas:

Ben Gaydos
Benjamin Gaydos is a Detroit-based designer and educator. Ben has conducted research in design and anthropology at Virginia Commonwealth University, where he received an MFA in Visual Communication/Design. He has presented his work at Rhode Island School of Design (RISD), Harvard University, and MIT’s Media Lab, among other institutions. Ben is co-founder and principle of goodgood, a social impact design studio with offices in Boston and Detroit. He is founding editor and creative director at Flint Magazine; a producer and designer for Sensate Journal at Harvard University; and the director of the Community Design Studio in Flint. Ben is Chair of the Department of Art & Art History and Associate Professor of Design at The University of Michigan – Flint, where he is faculty fellow at the Urban Institute for Racial, Economic, & Environmental Justice.

Jacob Blumner
Jacob Blumner is the director of the Marian E. Wright Writing Center and Professor of English at the University of Michigan-Flint. His professional interests beyond writing centers include writing-across-the-curriculum, writing theory, and haiku. He scholarship has appeared in writing-across-the-curriculum journals and he is the co-editor of two essay collections. He has also presented his scholarship at the International Writing Centers Association Conference, the International Writing Across the Curriculum Conference, as well as other national and regional conferences. His creative work has appeared in Qua, Wales Haiku Journal, The Zen Space, and others. Jacob holds a PhD in rhetoric and composition from the University of Nevada.

Nicole Broughton-Adams
Nicole is the Program Director for the MA Arts Administration Program in the Horace Rackham Graduate School on the University of Michigan-Flint campus. She is a Lecturer IV in Theatre Management, primarily teaching Stage Management, Production Management and Arts Administration. Nicole is also the Director of Production for Nicely Theatre Group in Detroit. Prior to working at the University Nicole was the Production Manager and Technical Director for BoarsHead Theatre. In 2005 she received her MFA in Production Technology Management from the Carnegie Mellon School of Drama. Other companies she has worked with include: Flint Youth Theatre, Shop Floor Theatre Company, Unicorn Theatre and Michigan Shakespeare Festival.

Andy Deck
Andy Deck is a media artist specialized in participative online media. Deck is a co-founder of the environmental arts collective Transnational Temps, which has made extensive use of online media in its global efforts to disseminate Earth Art for the 21st century™ through ground-breaking exhibitions like ECOMEDIA Ecological Strategies in Today’s Art.  The collective has also conducted youth-focused workshops that address environmental awareness in the urban context. Before coming to UM-Flint he taught in the U.S. and abroad in schools like New York University and the graduate program at the School of Visual Arts. His work has been featured on the Artport of the Whitney Museum of American Art and at the Tate Online in the United Kingdom. He has been the recipient of numerous grants and commissions, and has been included in major exhibitions of Net Art such as net_condition at the Media Art Museum in Karlsruhe, Germany.

Christian Gerstheimer
Christian Gerstheimer is an artist, curator, and educator based in Michigan. He lived in El Paso from 2003 to 2019 and was a curator at the El Paso Museum of Art for fourteen years. He has taught drawing and art history classes at the University of Texas at El Paso, and currently teaches art history at the University of Michigan-Flint.

His artwork has been exhibited in Berlin, New York, Chicago, Flint, Detroit and El Paso, TX, and is often presented as public interventions because site, context and social engagement are important factors. His practice seeks to raise awareness about the struggle of immigrants and immigration laws through interventions; performances and sculptural installations. His on-going November Project has become more oriented toward social justice and precarity since 2012 as well as increasingly utilizing new, digital media. Whether kinetic, video or assemblage Gerstheimer’s practice speaks the truth to power for the exploited in the US, Mexico and beyond. Gerstheimer earned a B.A. degree in Humanities Interdisciplinary, and an M.A. degree in Art History from Michigan State University, a BFA from The School of the Art Institute of Chicago, and an MFA in Creative Practice from the Transart Institute with Plymouth University.

Guluma Gemeda
Dr. Guluma Gemeda earned his BA and MA degrees from Addis Ababa University, Ethiopia, and his PhD from Michigan State University. Before joining the University of Michigan-Flint, Dr. Gemeda taught at Addis Ababa and Northern Michigan Universities.  At the University of Michigan-Flint, he teaches African and African American history; and in his scholarships, he specializes on the social and economic history of Northeast Africa, particularly on land and farming communities in Ethiopia. He has conducted research in Ethiopia and at national archives in the United Kingdom and the United States. Recently, he is also conducting research on the Sea Islands of South Carolina, in the United States. Dr. Gemeda has published several articles and book chapters. His recent publications include: ‘The Rise of Coffee and the Demise Imperial Autonomy: The Oromo Kingdom of Jimma and Political Centralization in Ethiopia’, in Contested Terrain, ed. by Ezekiel  Gebissa (Trenton, Red Sea Press, 2009) and ‘Land, Agriculture and Social Class Formation in the   Gibe Region, From the mid-nineteenth century to 1936’,  in State, Land and Society in the History of Sudanic  Africa, ed. by Donald Crummey (Trenton, NJ., Red Sea Press, 2005).  Currently, he is completing a manuscript on the history of coffee in Ethiopia.

Thomas Henthorn
Thomas Henthorn serves as the Wyatt Endowed Professor of Public History in the Department of History. His research explores the intersection of urban history and public history with a specific focus on Flint, Michigan. Dr Henthorn leads efforts in his department in civic engagement and has developed partnerships with organizations in Flint and across the state. His current projects include an exploration of local cemeteries and an examination of heritage and urban development in Flint in the mid-twentieth century.

Gabriela Hristova, DMA
Dr. Gabriela Hristova is Associate Professor of Music and Director of Choral Activities at the University of Michigan-Flint Department of Music. She conducts the University Chorale and Chamber Singers, and teaches courses in choral and instrumental conducting and music performance. Dr. Hristova is the director and conducting faculty of the Department of Music’s Summer Vocal Academy of Music – a summer day camp for middle and high school students widely-recognized for its high level of vocal music instruction. Dr. Hristova is a passionate performer, educator, adjudicator, and guest clinician of choral events throughout the Midwest. She has worked with choirs of all ages, both professional and amateur. Her research focus at the University of Michigan-Flint has been on the Choral Traditions and Choral Music of Bulgaria. She has also collaborated as an editor of the first Bulgarian Art Song Anthology published in the United States. Additionally, she connects her classroom teaching with research on repertoire planning and concert programming, and conducting gestures for effective non-verbal communication in rehearsal and performance. Dr. Hristova earned the Master of Music in Conducting and Doctor of Musical Arts in Choral Conducting degrees from the University of Michigan-Ann Arbor. She received the Bachelor’s degree in Music Education and Choral Conducting from the State Academy of Music in her native country of Bulgaria.

Colleen Marquis
Colleen is the Archivist for the Genesee Historical Collections Center. She is a regular contributor to the Genesee Historical Society’s publications and sits on the board of the Whaley Historic House Museum. Her research interests center around labor history, archives as the locus of shared community memory, and audio/video digitization. Today she lives in the College Cultural Neighborhood with her young daughter, husband, two cats, dog, and a growing number of unread books.

Shelby Newport
Shelby Newport is a Costume & Makeup Designer based in Michigan. She is the Associate Provost and Dean of Undergraduate Studies at the University of Michigan-Flint, where she also serves as an Associate Professor of Theatre. Shelby received her MFA from Purdue University in 2009 and her undergraduate degree from Cornell College. She has worked at a number of regional theaters including Colorado Shakespeare Festival, Great River Shakespeare Festival and Glimmerglass Opera.

Rebecca Zeiss
Rebecca Zeiss was born and raised, except for four years in Belgium as a teen, and still lives in Midland, Michigan. She received her BFA from the University of Michigan, where, as a painting and drawing major, she had the opportunity to study under photographer and educator Phil Davis, causing her to switch the focus of her work to photography. Continuing to experiment with photographic surfaces and mixed media, she received her MFA in photography from Central Michigan University. She is now teaching photography and printmaking at the University of Michigan-Flint.