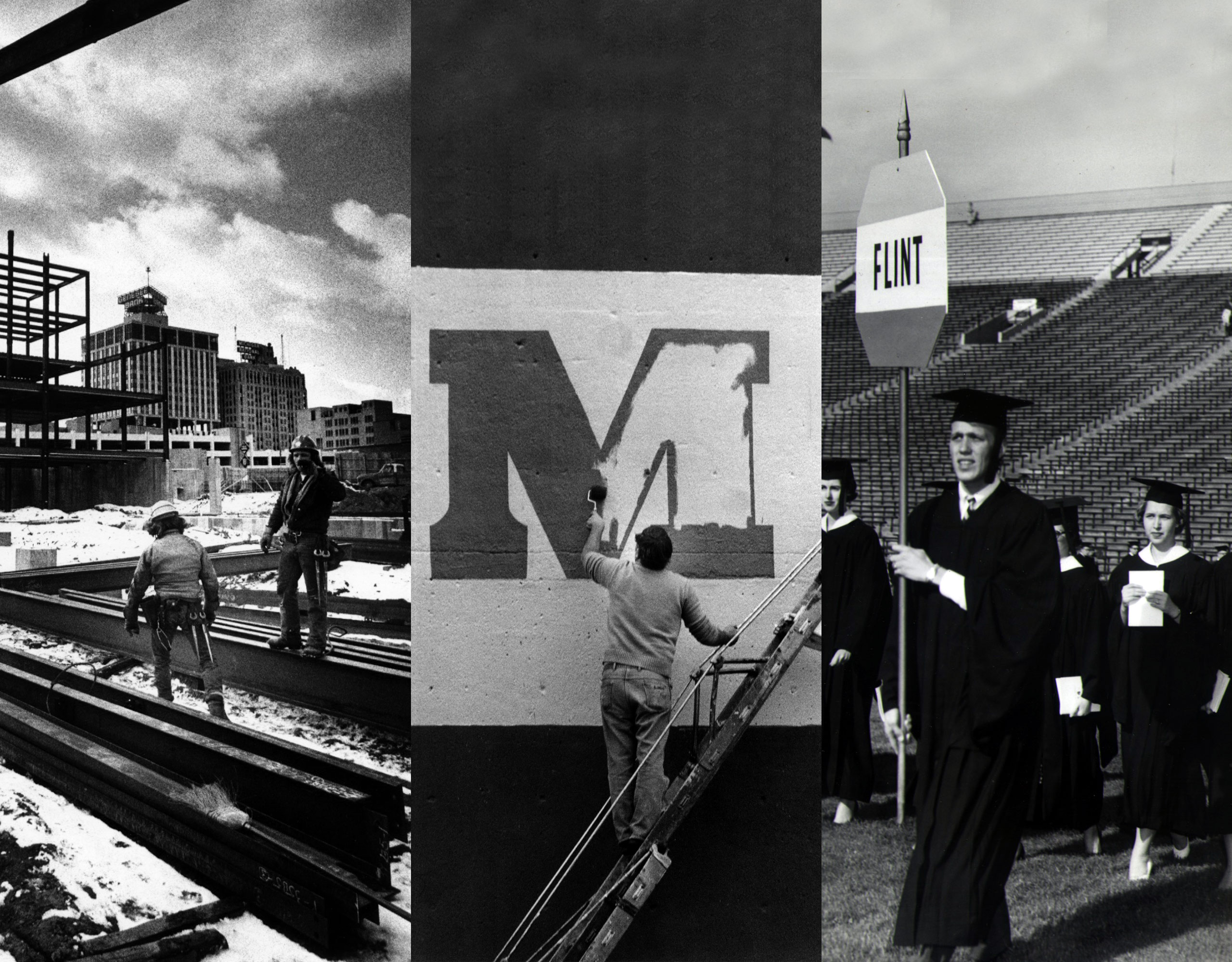 In a 1837 letter to family back east, Ann Arbor resident Sarah C. Miles Case wrote, “A branch of the Michigan University at Ann Arbor is to be established in Flint at some future day.”

That day turned out to be September 23rd 1956, nearly 120 years after Sarah penned the first recorded mention of a University of Michigan-Flint campus. On that autumn morning, 167 students began their first day at Flint Senior College (located where Mott Community College is today) with Dean David French as the first leader of the campus.

Owing to the vision, generosity, and leadership of community and state leaders such as Charles Stewart Mott, Governor George Romney and other leaders in Flint and Ann Arbor, the school continued to evolve and adapt in accordance with the needs of the community it was established to serve.

In the late 1970s, the university began moving to property in the heart of downtown Flint, building a riverfront campus with a small collection of buildings including the Classroom Office Building, (affectionately known as CROB to UM-Flint Alumni), the Harding Mott University Center, and the Recreation Center. As student enrollment grew, the Murchie Science Building opened in 1988, and in 2021 a new wing for expanded STEM courses opened. A gift from benefactor Frances Willson Thompson led to the building of the striking Thompson Library in 1994. In 2001, UM-Flint expanded north for the first time with the opening of the William S. White Building which houses health classrooms and labs. Today, the modern and inviting campus spans over 70 acres along the Flint River.

As a community partner, over time the university has acquired existing buildings throughout the downtown and turned them into viable parts of the campus. These spaces include University Pavilion (pictured here on the left), the Northbank Center, The Riverfront Center, and most recently the former Citizens Bank Building.

In 2006, UM-Flint celebrated 50 Years of Excellence. The university finally became a residential campus in 2008 when 300 students moved into the First Street Residence Hall, and added a second residence hall with the addition of the Riverfront Residence Hall in 2015. That building is also home to the newly renovated Riverfront Conference Center which is Genesee County’s largest conference venue, hosting thousands of visitors each year.

Professors pour their expertise and creativity into the development of research and service-learning projects that match course curriculum with the world’s most-pressing issues. These projects bring learning to life, address community needs, and fulfill students’ desires to contribute to the common good. This dedication to service has earned UM-Flint many accolades.  In 2010 and again in 2019, UM-Flint received the prestigious Carnegie Classification for Civic Engagement. Then in 2012, UM-Flint was selected as the first recipient of the “Engaged Campus of Year Award” presented by the Michigan Campus Compact.

In 2021, UM-Flint marked its 65th anniversary, celebrating its position as one of only three campuses of the world-renown University of Michigan. Today, the campus continues to undergo a transformation as it grows academically with new undergraduate and graduate degree offerings, expanding partnerships with local and regional entities and industries, and remains committed to the ideals of diversity, equity and inclusion by making an affordable, accessible education possible to the community.